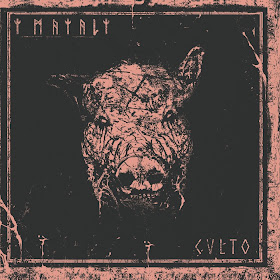 Hey brutalbangers,
this is the first review written on this 'zine by Marta Rose, a punk girl and a friend of mine that, one month ago circa, asked me if she could write something for my 'zine. Well, I accepted her proposal without any doubts, so I sent her the first album of I Maiali, a post-hardcore band from Rome whose "Cvlto" was released by OverDub Recordings, a label already known on these pages thanks to my recent reviews about Fankàz and Bioscrape. I think that her first review is very good but let's stop this chitchat and please start to read it. Enjoy!

Trying to describe the story of I Maiali in just a few little words is very hard. Why? Simply because their music is a deep and dark voyage into the hidden corners of the human mind. A twilight sleep populated by demons, fear and anger.
The band’s name, I Maiali, is the Italian translation for “pigs”. The word normally has a bad connotation, because it can be used as an offence, but the band decided to be called in this way in order to give the word a positive nuance. In fact, we can think of it as something that we all “adore” and eat, which satisfies our hunger, as the band stated.
But now let’s talk about the band! I Maiali is a project that was born in Rome in 2016. Their sound is dirty, discordant and desperate, a mixture of post-hardcore music and noise, along with the sound of the nineties.
Their first album, “Cvlto”, produced by Phil Liar at Monolith Rec Studio and mastered by Jerome Gudman at Mistery House Sound Studio (Detroit, Usa), is a powerful translation of Dante’s Inferno verses into music.
The CD cover is simple, we could almost say that it evokes a kind of prehistoric art. It shows a pig (the band’s logo) and it’s black and pink. All the “I” that are present in the cover album are shaped like a stylized pitchfork.
The album is made up of 10 powerful, dissonant songs. If we listen to the sound of “Cvlto” carefully, we could see that it evokes the sonorities of bands such as the Fugazi (in particular “Repeater”) and The Jesus Lizard. It is an evolution between the post-hardcore and noise sound.
The first track, “Ave”, is like a post-hardcore version of a satanic litany. It starts with a bass riff and it ends with a pray: in this part, the singer doesn’t scream anymore, his voice becomes darker, and the song terminates with a prayer: “Parola del signore, del signore onnipotente, sta esplodendo, Amen” (“Word of the Lord, of the Lord Almighty, is exploding, Amen”). 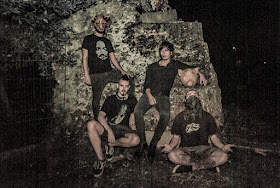 The first track of the album shapes perfectly the album’s sound, which is deep and obscure, like a ritual. Every song is like a gloomy prayer. We don’t know which entity the band is evoking. Perhaps it could be a demon, as it is affirmed in their second track, “Demone”. "Demone" is a desperate invocation of a demon in order to seek protection and comfort. The song has a very powerful intro and there are a few lines that are repeated all over the song (as happens in all the album). The fourth and the eighth tracks, “Danza come Manson” and “Heil”, sound like a tribal, primitive dance. In “Danza come Manson”, there are two words, “danza” and “fondo”, that are employed all over the song. The sixth song, “Carne”, is an unholy reinterpretation of the Christian thought; in fact, it says “sei carne, ritorna carne, l’anima è una beffa”, which can be translated as “you’re flesh, turn into flesh, the soul is a hoax”. It could be seen as a way of rejecting the Christian thought of life after death and the human soul’s redemption.
“Cvlto” is the track that named the album. In this song, the three demons are talking about a ritual which must be venerated “adora il culto” (“adore the cult”), and to convert those who don’t uphold this obscure ritual into believers.
Overall, “Cvlto” is the result of a series of concerts and compositions, as the band claimed during an interview. The outcome is an obscure voyage into the post-hardcore and noise sounds combined with the unholy occult. So, listen to “Cvlto”, an album that comes from the cradle of the Christian religion and go with the flow of these sinister and hellish noises that come from 10 infernal prayers!