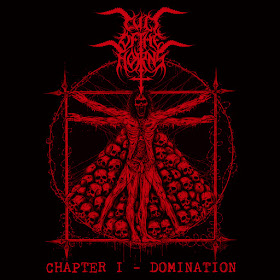 
If I am not mistaken, Mephisto, the guy behind the French one-man band Cult of the Horns, belongs to my FB group "Bestial Black/Death Metal", and I imagine that he will be happy by reading this positive review about the debut album "Chapter I - Domination" of his malevolent creature. I've got this album in my hard disk even since late August when Aleksey of Satanath Records sent it to me along with other releases (already reviewed on these pages) but I listened to it only during these last days.

Firstly self-released in 2016 and then re-issued in 2017 by Symbol of Domination (the extreme parent label of Satanath Rec) in alliance with Ira Militias, "Chapter I - Domination" is presented through an artwork that is a bloody and funereal version of the so-called Vitruvian Man by Leonardo da Vinci, a perfect image to introduce yourself to the holocaustic assault of Cult of the Horns. After the militaristic "Intro: March of the Tyrants" full of apocalyptic vibes, the album starts with "Mass Destruction Supremacy", and, from here to the end, it's useless to say that your ears will be under a non-stop attack!

Basically, Cult of the Horns plays a dynamic black/death metal with many tempo changes also thanks to the imaginative drumwork of the session Naja-Atra (also if I consider the drums' sound a bit weak. Anyway, this musician is known for bands like Gomory and Pendulum) so to range from slow to ultra-fast ones while there are some violently bestial outbursts à la Blasphemy (especially in the same "Mass Destruction Supremacy" and "Worship of the Idol", a number that contains even some fantastic riffs) that I like a lot, as you know.

There is need to say that the death and black metal elements are perfectly balanced, so you have to expect to hear, for example, melodic and despairing riffs and arpeggios in a classic black metal style, and also riffs à la Deicide and wheezing growls (alternated with some screams here and there) more typical of the death metal genre. But, to say the truth, there are also some thrashing and punkish moments (like in "Revolts (The Final Uprising)") that gives a scrapping aura able to make the music more intense. And don't forget that, in few songs, there is also a sort of shrilling double guitar solos, like in the first three songs until "Domination". 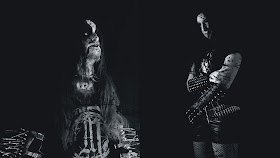 The great dynamicity of the various numbers is also justified by their average lenght since some of them lasts 5 minutes, reaching even the 6 minutes and 30 seconds circa with "Divide & Conquer", that, containing also long spoken parts, is characterized by strongly black metal tunes. At its contrary, there is that shrapnel of 90 seconds circa called "Eradication", surely the most violent and savage song of the entire album. And, just for this, it's one of my favorites along with "Mass Destruction Supremacy", "Revolts..." and "Worship of the Idol".

Well, before listening to "Chapter I - Domination", I expected a more orthodox war metal album in the style of Necroholocaust or Proclamation (two of the bands mentioned by Metal-Archives as similar to Cult of the Horns) but it isn't entirely correct. This because I discovered a band that belongs surely to the war archetypes but showing, anyway, a good personality expressed through many different influences, a great dynamicity and enough complex structures a bit far from the classic war/bestial standards. Said that, Mephisto is now working on a "Chapter II" and preparing for the live comeback scheduled on 27th April 2018 where the live version of Cult of the Horns will play in Nantes with black metal bands called Sordide and Incipient Chaos. Ha!, and if you wondering who is the demoness at the right in the band pic, I think she is the co-owner, along with Mephisto, of Ira Militias...do I say right?