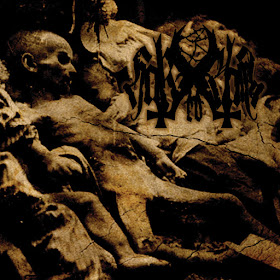 You know, Canada is a promised land for the most extreme metal bands, and this starting from even Exciter, that attacked in 1983 the rules of the traditional heavy metal with their raw fast assault forever immortalized into their now classic debut album. In fact, today I'll review a band that completely respect the tradition of the Canadian slaughter metal: Hak-Ed Damm (Hebrew for "field of blood"). Born in 2007, they released in the end of 2017 a killing second album called "Holocaust Over Dresden". Considered by them as a concept-album about World War II so to reveal the "bestial nature of man and atrocities commited in this period", its title refers to the apocalyptic and terrible bombing of Dresden between 13td to 15th February of 1945, very criticized today because this German city wasn't a really important strategic objective for the Allies.

WAR, WAR AND FUCKIN' BESTIAL WAAAAR! The 9 songs of this album, in fact, represent a perfect transposition in music of the concept that Hak-Ed Damm want to recreate. So, expect to listen to a war black metal completely dedicated to brutalize the ears of the listeners without any fukken compromises also through the diabolical and demented screams of Zokvist, a singer literally on fire throughout the entire album. It's incredible the blasting fury of this band, especially in songs like "MG42" (where Silencer is able to reach amazing levels of speed and aggression with his drumming skills!) or the non-stop slaughter of "As Kadavers Suddenly Squirt" (maybe the most violent song in the list). And obviously, this album is full of war effects like marching soldiers, air siren raids, machine gun fires and so on.

To say the truth, the black metal played by these 5 proud inhabitants of Québec is little more than a pure massacre. In fact, the songs are basically very dynamic and well structured while the guitars are able to be melodic also through some layered riffs in order to avoid the one-dimensional (but effective, anyway) genocidal hellstorm of similar bands like Infernal Blast. But the most interesting feature comes surely from the great performance of Zaïtsev, always busy to create imaginative basslines very rare to hear especially into black metal albums of this kind. Wisely, Hak-Ed Damm thought well to offer an acoustic and despairing number ("Auschwitz-Birkenau") in the mid of the tracklist, so to take a little breath before to restart the bloodshed with "Usine de Mort". 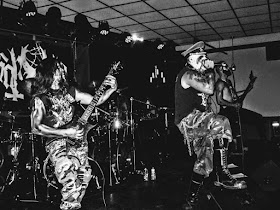 In brief, if you are used to hurt yourself with stuff like Marduk, Endstille, Handful of Hate or the same Infernal Blast, then this "Holocaust Over Dresden" is totally perfect for you, especially during songs like "MG42" (like the Nazi machine gun with the same name), "Blooming Grove" (a bit thrashing) and "As Kadavers Suddenly Squirt", that are my favorite ones. Sure, the album is so brutal that, maybe, it's better to listen to it in small doses also because some songs reach even 5 or 6 minutes of lenght but I would like that Satanath Rec releases more sanguinary and ultra-violent products of this kind! Now it's the moment for some news: Zokvist left the band shortly before the release of the album but, fortunately, he has been substituted by Winterthrone (already in Cardinal Roark and Dépérir) while they will have the honor to share the stage with the legendary Polish black metal band Graveland on 13th October 2018 in occasion of the Skogen Fest. LET'S START THE ULTIMATE WAAAAR!!!